Dancing On Our Graves 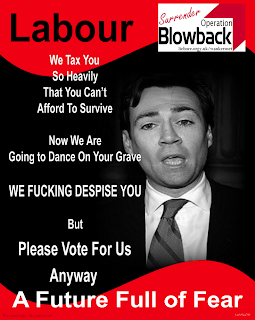 Ministers accused the Conservatives of scaremongering with their 'R.I.P Off ' poster campaign, denying plans for a flat-rate death tax and demanding the Tories take down the adverts.


Mr Burnham has insisted that all options are under consideration, including the Tories' favoured voluntary insurance levy and the Liberal Democrat's preferred ' partnership' between the state and patients footing the bill.

But yesterday the Government signalled strongly that a compulsory tax was its favoured option.

'On balance the majority view was to reject the Green Paper options of "Partnership" and "Insurance",' it said in a statement.

Mr Burnham yesterday seized on support for a death tax and called for firm proposals to be brought in quickly.

He said that despite the 'sound and fury' surrounding the debate, there was a 'good degree more consensus across political parties and the care world than people may realise'.


So really Andy, the Tory posters were right in the first place, weren't they? Seems like,despite being given advice on this, by people who know what they are doing, in typical Nu Liebore style, you prefer to go into denial mode first and then do exactly what the lobbyists wanted.