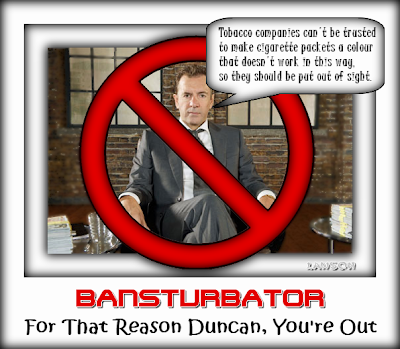 Tomorrow, [TODAY]the House of Commons will see the third and final reading of the Health Bill. I believe MPs must support the clause that would ensure that cigarettes being sold in shops must be stored out of sight, though I'm puzzled and concerned as to why so many seem reluctant to back this move.

Ending point-of-sale displays in this way is an excellent idea and necessary. Whether by accident or design, the primary colours used on both the outside of cigarette packets and the shelves they are kept on attract children. It's the same marketing technique that is used with confectionery.

Tobacco companies can't be trusted to make cigarette packets a colour that doesn't work in this way, so they should be put out of sight. This is very important because most smokers get hooked as teenagers – few start at 18 – so if we can stop children being addicted tobacco companies will soon run out of customers.

The government's "de-normalisation" of tobacco is welcome, but it's taking too long. The Health Bill proposes to restrict cigarette-vending machines in pubs. But they should be banned altogether. Even smokers don't like them, because they typically give you only 16 cigarettes instead of a normal packet of 20 and cost £6, about £1 more than in the shops. And many pub landlords think the government's halfway-house proposals are unworkable because bar staff would have to check people's age ID before operating the machine by remote control.

Who the fuck elected you to interefere in other peoples lives?

Nod and a wink to Man Widdecombe