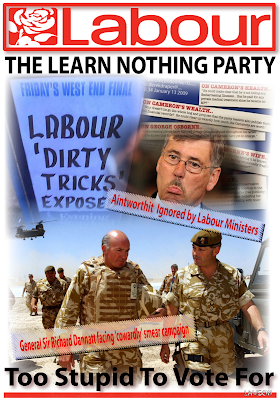 General Sir Richard Dannatt, the head of the British Army, is facing a “squalid and cowardly” campaign to smear him, according to Liam Fox, the Conservative shadow defence secretary.

"The Daily Telegraph reported last month that some Labour MPs are preparing moves to tarnish the general’s reputation once he leaves office. One minister said at the time that Sir Richard would be “fair game” in retirement.

Bob Ainsworth, the Defence Secretary, responded to that report by issuing a formal warning to all ministers in his department not to brief against Sir Richard, who is planning to write a book about defence when he leaves office.

Despite Mr Ainsworth’s warning, Labour moves against the general are said to be continuing."

Better get control of your ministers Bob. They'll be doing the same to you next, and what a shame that will be, you useless fucking dickhead.