Three children under the age of six have been accused of verbal abuse and anti-social behaviour by Lincoln police. 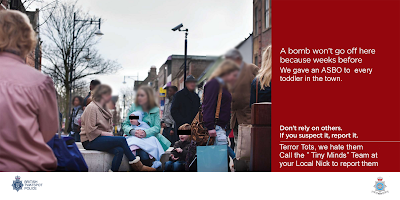 Mum Shelly Hubbard (24) was shocked when a letter arrived on official police notepaper saying that complaints had been made about her kids.

In the hand-delivered document, PCSO Tony Kennedy stated: "Children from your address are involved in incidents of anti-social behaviour and nuisance problems.

"We have received a number of complaints over the past few weeks regarding these youths being abusive when asked to stop playing football in the street and there are also allegations regarding possible damage to property."

"I thought it must be a mistake," said Miss Hubbard. "So when I got the letter I rang them because I thought they must have the wrong address, but they checked and said it was right.

"It says if a neighbour complains then I should move him on – but Lennon's two, what can I do? Where can I move him on to?"

Inspector David Legg of Lincolnshire Police has apologised for the distress this has caused.

PCSO Tony Kennedy, fearless in the face of tiny terror. Bet you're getting the piss ripped now.