Call for Vaz to Resign. 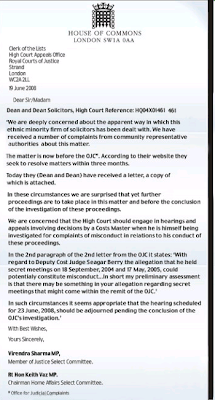 Labour MP Keith Vaz tried to halt a court case involving a firm which had lavished hospitality on him.

He says the matter has been dealt with and has nothing further to say.

But co-signatory to the letter, fellow Labour MP Virendra Sharma, has since complained that he was not told by Vaz of his acquaintance with Mireskandari.

Yesterday there were calls for a new sleaze investigation into the affair. An inquiry, launched last autumn by Parliamentary Standards Commissioner John Lyon, cleared Mr Vaz of any wrongdoing. It was condemned as a whitewash.

"If true, the fact that Keith Vaz wrote as chairman of the home affairs committee must cast real doubt on his continuing as chair."

Sir Alistair Graham, the former chairman of the committee on standards in public life, said:

"I am really surprised that an experienced chairman of the home affairs select committee should seek to use his position in such a way when he clearly had a personal conflict of interests.

"I would have thought that the committee would want to question the chairman about him using his position in clearly such an inappropriate way."