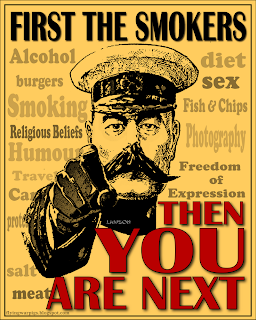 
If this report is true, it means that smokers in Europe will soon be subjected to Soviet-style show trials where justice will take a backseat to propagandizing and scapegoating.

"....many jurisdictions recommend the use of high-profile prosecutions to enhance deterrence. By identifying prominent violators who have actively defied the law or who are well known in the community, by taking firm and swift action and by seeking maximum public awareness of these activities, authorities are able to demonstrate their resolve and the seriousness of the law."

It appears that the EU has allowed a misguided public health initiative to devolve into an unequivocal, anti-smoking witch hunt. To "recommend the use of high-profile prosecutions"  for  people "well known in the community" amounts to nothing less than targeting particular people for prosecution--not only before they've broken any law, but perhaps even before a law exists to be broken.

The use of such language within the EU is more than frightening tough talk for the sake of  compliance with a public health measure. It's reminiscent of tactics used by the world's most dangerous regimes, and displays a blatant disregard for the most important historical lessons of the twentieth century.

On May 6 2009, the House of Lords debated and approved a Bill that made it a crime to display tobacco products on open view in British shops (thus creating 'the dark market').

One aspect of the debate was the cost to shop-keepers of re-fitting their premises to comply with the law. In December 2008, the government estimated that it would cost the average shop £1,000 to do so. With a vote pending in the House of Lords, it was in the interest of the anti-smoking lobby to convince peers that the cost would be considerably less than that.

This is the story of how they went about it, made possible by the Freedom of Information Act, under which dozens of previously unseen Department of Health e-mails have been made public. 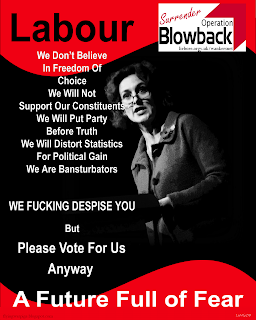 Gillian Merron MP is in denial mode and doesn't want to be re-elected.
Please feel free, if you live in her constituancy,  to make sure her wish is granted.
Nick Hogan has become the first person in Britain—and one of the first in the world—to be imprisoned for taking a stand against the smoking ban. He has been given a six month prison sentence for non-payment of a £10,000 fine. His crime was allowing people to smoke on his own property. 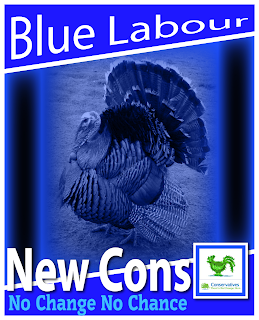 This lot are hell bent on proving that a turkey really will vote for the oven
at a critical time in their political career.
They probably will not be offering support to Nick Hogan or those who object the smoking ban on principal.
They don't seem to believe that your vote is needed.
Tips of the hat to each and everyone of the bloggers that provided source material and helped towards major depression amongst the political luvvies who can't see where their careers are headed.